State Opera has an established tradition of staging modern operatic works and shorter, classical operas in its Netley Studio, which provides an opportunity for all the creative artists involved to experiment with their art and for Adelaide audiences to be introduced to a wider range of opera.

Written within a decade of each other, the works treat love and secrets in quite different ways. Italian composer Ermanno Wolf-Ferrari’s Il Segreto Di Susanna is a light, humorous treatment of a jealous husband who is convinced his wife has taken a lover because he can smell cigarette smoke when he returns home. Eventually, his wife reveals that she is the closet smoker and they are reconciled.

Hungarian composer Béla Bartók’s Bluebeard’s Castle is a much darker, psychological thriller that begins with expressions of commitment and love but ends tragically: the libretto was written by the poet Béla Balázs, based on the French folk tale La Barbe Bleue by Charles Perrault.

A modern audience is likely to tolerate early-20th-century power inequalities in relationships as displayed in Il Segreto and is equally likely to be disturbed by the abhorrent cruelty of Bluebeard to his wives.

Lampard has designed an attractive art deco set with upstage doors hidden within hexagonal wallpaper that are used effectively as if the opera was a Feydeau farce. 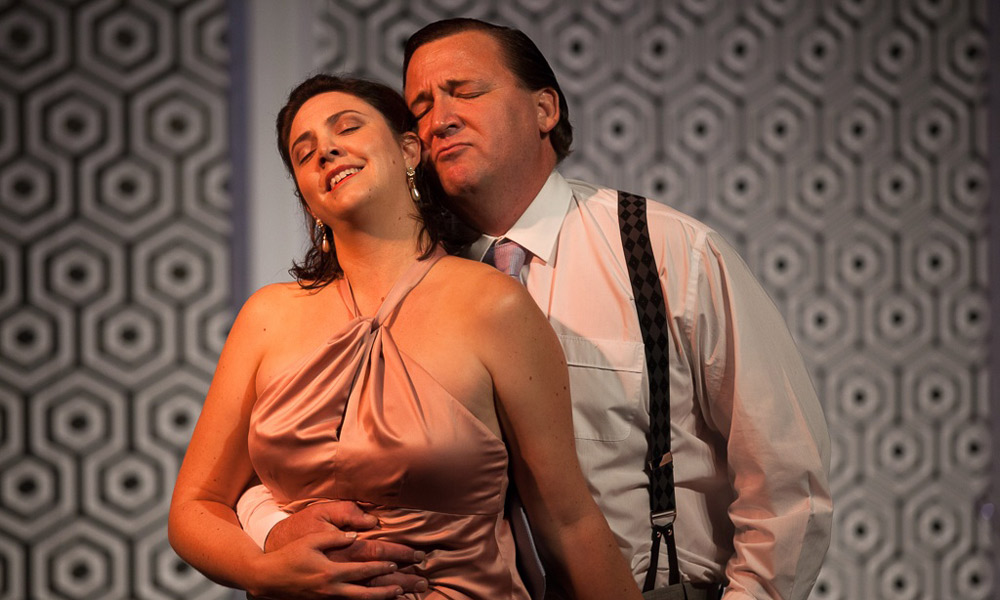 Musical director David Barnard brings Wolf-Ferrari’s score to life with brightness and clarity and, cleverly, Rod Schultz, as Sante the waiter, creates very entertaining comical business to set the scene and make the most of instrumental passages. Schultz works superbly with soprano Naomi Hede, the elegant Countess Susanna, and baritone Joshua Rowe, the jealous Count Gil: the trio extract every bit of comedy from the scenario and create a musical delight.

By removing two downstage windows and replacing them with eight white blocks, the appealing art deco home is transformed into a castle with overtones of a sinister prison for Bluebeard’s Castle.

Lighting designer Daniel Barber has enjoyed the creative freedom of using new coloured LED theatre lights but he gives no tricks away in the opening scenes, which are softly and dimly lit: Lampard has his performers, Jeremy Tatchell  (Bluebeard) and Deborah Johnson (Judith), exploring the space with subtlety and precision. The feeling is ominous and foreboding; although they express their adoration of each other, with Judith being told she is the light to brighten the castle, there is within Bluebeard a dark mystery not to be tampered with.

Tatchell’s powerful presence never falters and his sustained singing commands the attention of everyone. Johnson grows stronger with each production and her heartfelt performance matches Tatchell’s. Bartók’s music sounds like a modern composition, especially when percussionist Andrew Wiering joins with Barnard: the singers and musicians combine to create many wonderful moments.

The intimate Netley Studio set is almost Elizabethan in nature and its simplicity invites the audience to imagine what Judith sees as she faces towards the audience: Bluebeard’s treasure, armoury, garden and lake of tears that all become tarnished with blood.

Bluebeard’s Castle is a richly symbolic piece which may suggest every man has secrets locked away inside that he doesn’t want explored or that his past lovers are never really forgotten but always kept within the psyche – or it may be a foretelling of the more sinister real events of men locking women away from society for years, or even the brutality of domestic violence. The final image of women with blood smeared on their faces as Bluebeard sings of darkness is hauntingly beautiful.

The double bill of Il Segreto Di Susanna and Bluebeard’s Castle was presented at Netley Studio on April 17 and 18. State Opera’s next production will be Mozart’s Don Giovanni from May 23-30.