Caroline Rothwell incorporates weeds, military camouflage and car exhaust in artworks exploring the complex relationship between humans and the environment.

Her new exhibition Urpflanze street plants opens at the Santos Museum of Economic Botany in the Adelaide Botanic Garden today and is part of the 2014 Adelaide Biennial of Australian Art: Dark Heart.

“I see plants as cyphers, in a sense, for paralleling how humanity moves through the world; a way of analysing social history and ideologies,” Rothwell tells InDaily.

“In the exhibition I use a lot of military camouflage, as a device to discuss landscape and borders as well as for the painterly aesthetic.”

The artist has been exhibiting around the world since the early ’90s, and is recognised for her ability to create two-dimensional pieces using a scientific focus to look at humanity’s relationship with the environment.

“Dad was  a scientist, so I think it’s ingrained in me when I’m collecting (whether it’s weeds or car exhaust emissions) to always note the date, place, make, etc,” she says of her inspiration.

“It is a bit of citizen science, really. I’m interested in trying to use materials and processes that don’t have a large footprint and to try and track our current environmental conundrums.”

Rothwell references Goethe’s theory of the “archetypal plant” as inspiration for her Urpflanze series, in which she has created hybrid “uber-weeds”.

“Weeds go where we go … like humans, they’re mega colonisers,” she explains.

“The term Urpflanze comes from Goethe, who in the 1790s had a theory of a kind of single God-like plant that encompassed all plants, past and future … the single stem with different specimens coming off it represented this idea. I’ve borrowed the form and updated it for my own collection of super-weeds.

“The representation of the weeds that I (or others) collect are embroidered onto the military camouflage of the territory where the plants have been collected.  The camouflage and the plants together are kind of a mapping story, tracking our political/ economic forays.”

The exhibition at the Museum of Economic Botany also features Rothwell’s PVC “paintings” and drawings of insects made from exhaust collected from car exhaust pipes. 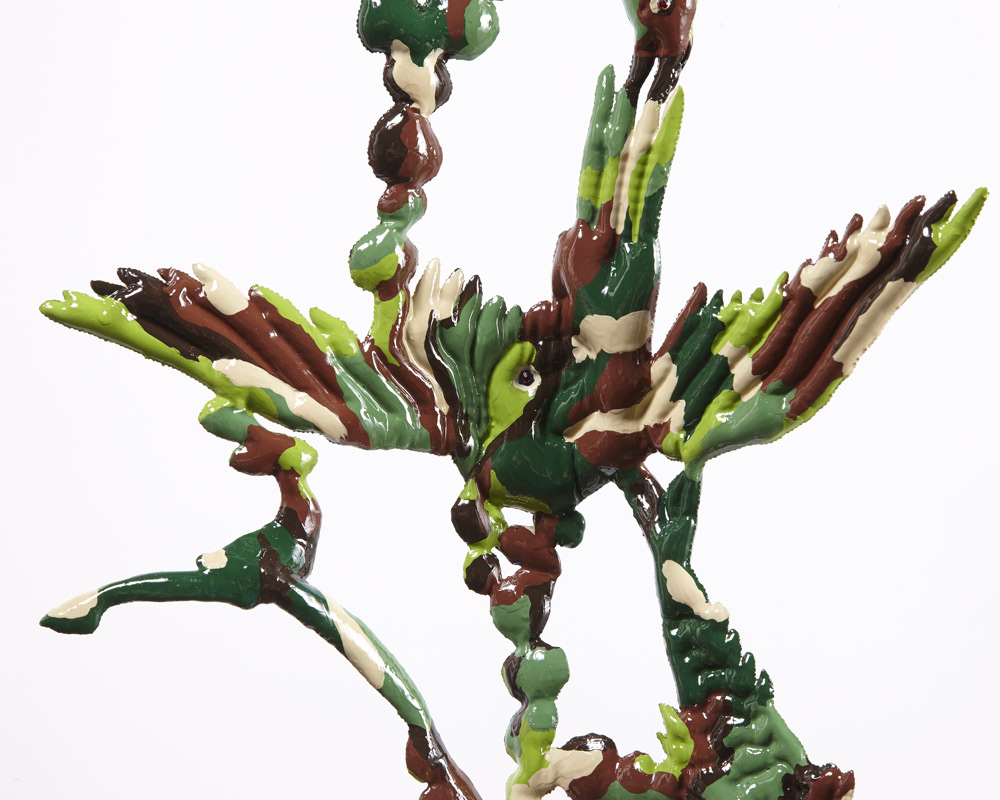 “I’m interested in using this exhaust pollutant as a tool for painting,” she says.

“The Victorians used carbon from the inside of lamps and mixed it with a binding agent to produce paint. This is a similar process.

“My interest was really first sparked when I was reading about the fast evolution of peppered moths in England during the Industrial Revolution.

“The moth was a light colour and they used tree trunks for camouflage. At the time, the trunks quickly became covered with soot from local factories and consequently the camouflage failed and only the lighter moths survived to breed … so from that I’m interested in using the pollutants as the medium.

“I often paint endangered species and can only find low-res digital images of them on the net so I end up fictionalising these species, which often governments and society fails to take responsibility for.”

Those viewing her art are encouraged to reflect on their own practices and judgments, and to question humanity’s commodification of nature.

“I use my work to clarify my views; it’s a visual interpretation of this ongoing conundrum,” Rothwell says.

“People are really engaged in what’s happening; hopefully the government might realise we (humanity and nature) are in this together.”